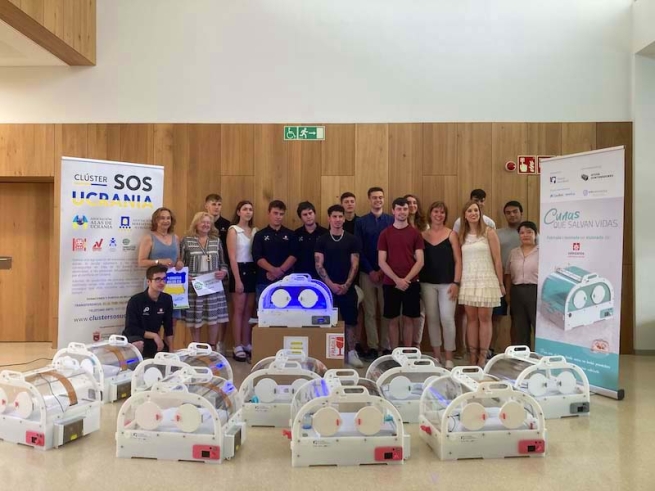 (ANS - Pamplona) - On Thursday, June 16, the platform of associations and organizations committed to the Ukrainian population "Clúster SOS Ucrania" of Navarre received the donation of 10 incubators made by students and teachers of Salesian Vocational Training Centers, which will soon be on their way to Ukraine. Five will be destined for the Kyiv region, three for Zaporizhia, and two for Mykolaiv.

Present at the handover of these 10 incubators, along with Navarre's leading media, were representatives of the entities that donated the funds for their construction and shipment: the Mulier sports club, the "Pharmacists without Borders" association, and the "IMQ" insurance company from Asturias.

"Clúster SOS Ucrania" contacted the Salesians in Pamplona when they heard about the project that the Salesian centers are carrying out. It is the "Life-saving Incubators" project, in which eight Salesian Vocational Training Centers of the "Spain-St. James the Greater" Province are involved.

The ongoing war in Ukraine is causing premature births to occur in places that are not medically equipped. The incubators designed by "Medicina Abierta al Mundo" were built by students in the higher level mechanization cycles of the eight Salesian VTCs, and young people from the Electricity and Electronics course at the Salesian complex in Pamplona did the electronic assembly.

"For us," the students said during the presentation, "it’s a pleasure to work on the construction of these incubators for premature babies. We learn to work with new materials and feel useful. It’s very inspiring for all of us."

The Ukrainian counterpart of "Clúster SOS Ucrania" has ordered 50 units, 10 of which have already been shipped.

The "Incubators Saving Lives" project began last year with a collaboration between the Salesian VTC in Pamplona, and the NGOs "Medicina abierta al Mundo" and "Ayuda Contenedores" and was expanded this year to 7 more centers. Before the beginning of the war in Ukraine, they had already been sent to other countries that needed these apparatuses, mainly in Africa and America.

Pablo Sánchez, the young engineer who participated in the design of the incubators, said in the presentation that the demand is high and comes from different places, so they will continue to produce them during the next academic year.

"Medicina abierta al Mundo" developed the idea, designed the prototype, and built the first incubators "but the Salesian centers have become the strength of the project," they said.

Many companies have been interested in contributing in their own way by supplying materials or manufacturing small parts of the incubators on a larger scale than an educational center can offer. This is the case with the collaboration of the company "M Torres," which provides 3D printing of small parts to complete the device, or "Moshy", which donated the liners for the incubators' mats. In addition, the project also enjoys the support of the banking company "La Caixa," through the "FPDualiza" initiative.

LiLy Shyshkovska, a representative of the association "Alas de Ucrania," which is part of the "Clúster SOS Ucrania," addressed the audience wishing that not many more cradles would have to be sent to her country as she hoped the war would soon come to an end, and finally said, "Thank you to all the people who participate in this project. You are incredible. Even among so much evil in this world, thanks to you, trust in the goodness of human beings is returning."