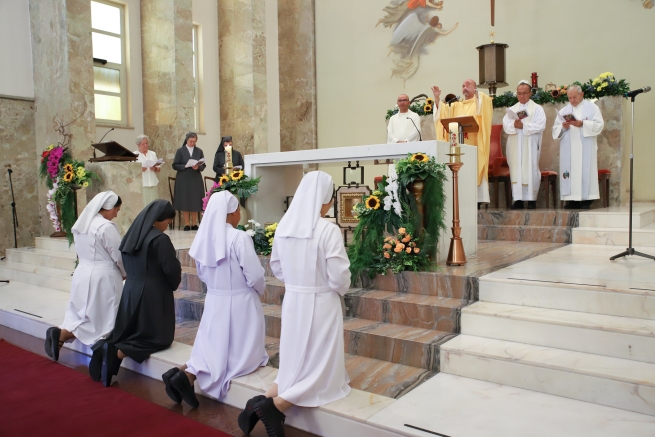 (ANS - Mornese) - On Friday, Aug. 5, 2022, on the 150th anniversary of the founding of the Institute of the Daughters of Mary Help of Christians (FMA), the Vicar of the Rector Major, Fr. Stefano Martoglio, in the presence of the Institute's Mother General, Mother Chiara Cazzuola, and other Sisters on the General Council, presided over a solemn Eucharist inside the Shrine dedicated to "Santa Maria Domenica Mazzarello" near Mornese, during which four FMAs - originally from East Timor, China and the Middle East - made their Perpetual Profession, a public and ecclesial act.

From the beginning of the celebration, Fr. Martoglio expressed his joy at being able to participate in an event of the faithfulness of the Lord and the FMA on such a significant historical date for the FMA Institute. "The first grace we ask, for us and them, is to be deeply in love with God," he said taking up the reading from the Song of Songs. "The truest expression of our surrender to the Lord is our humanity, which communicates the presence of God. 'Rejoice always' (1Thess 5:16-24), says St. Paul."

Commenting on the Gospel passage, the Rector Major's Vicar then pointed out, "At the wedding at Cana there is a lack of wine, a lack of joy. Mary notices this, and she lets them know when something is broken. She calls the servants and says, 'Do whatever He tells you.' Mary's intercession produces miracles."

Finally, he wished each of the professed sisters, "Transform the amphorae of your life into full and endless joy. Surrender yourself to God, and He who is your peace, your serenity, will transform your suffering, your life, and through you, the lives of so many people. This is the sign of being consecrated, handed over."

Subsequently, the rite of religious profession took place: representing the whole world and following in the footsteps of generations of FMAs who in 150 years of history have responded to the Lord in total self-giving, the four candidates publicly concretized their desire to give themselves completely to the Lord to serve young people according to the plan of St. John Bosco and St. Mary Domenica Mazzarello, forever uniting their lives to the sacrifice of Christ. Immediately afterward each received a chosen symbol: a wreath of flowers, a lighted lamp, rosary beads.

At the end of the celebration and the thanks of the new perpetual professions, Mother Chiara Cazzuola, on behalf of the Institute, thanked the Rector Major, Fr. Ángel Fernández Artime, for donating the presence of his Vicar on such an important day for the history of the Institute, the concelebrating priests, the families and all those who accompanied them on the journey.

On the occasion, he also remembered the many FMA who, on that same day, in all parts of the world, celebrated First Professions, Perpetual Professions, and other anniversaries of consecration to the Lord.

More photos are available on the FMA Flickr channel.