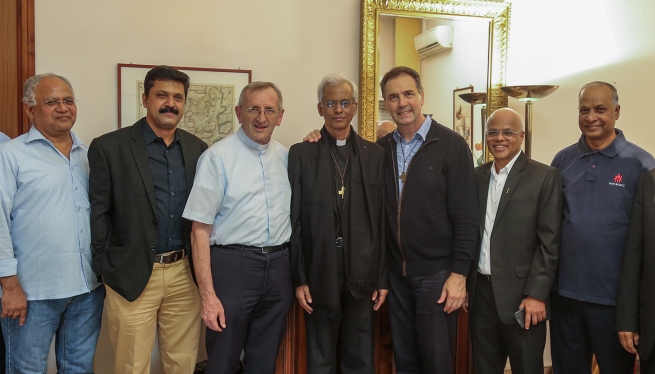 (ANS - Rome) - After more than 18 months of captivity in Yemen and two weeks of rest and medical treatment in the Vatican, Fr Tom Uzhunnalil is finally about to return to his country, India, to re-embrace his family and his confreres of the Bangalore Province. Yesterday, Tuesday, September 26, the Salesian missionary returned to the General House to greet the new Salesian missionaries and to take leave of the Rector Major, Fr Ángel Fernández Artime.

Fr Tom began the afternoon of visits and greetings at “Beato Artemide Zatti”, the care home for elderly Salesians, in Rome. Then, at around 5 pm, he was warmly welcomed by Fr Guillermo Basañes, General Councilor for the Missions, by the director of the community, Fr Jean-Claude Ngoy, and by a large group of missionaries who had received their mandates and Missionary Crosses last Sunday at the Basilica of Mary Help of Christians in Turin.

Fr Tom again met with the Rector Major and his Vicar Fr Francesco Cereda. Fr Á.F. Artime confided to Fr Tom that in the homily of the mass for the departing missionaries he presented Fr Tom as an example and role model for the new missionaries: "I also told them that there is a missionary style you have exemplified and we have been witness to. That is to say that to be missionary, it is not necessary to do many things, but to pray for others, to share life even without freedom, to bear profound peace and to live in faith."

Over the next few days many appointments await Fr Tom, who will depart tonight by plane towards India. Tomorrow he is scheduled to meet with the highest political authorities - Prime Minister Narendra Modi and Foreign Minister Sushma Swaraj - and Catholics – beginning with the Apostolic Nuncio of the country, Msgr. Giambattista Diquattro, and from the Siro-Malabar Archbishop of Faridabad, Msgr. Kuriakose Bharanikulangara. They will attend a press conference at the Indian Bishops' Conference and a Thanksgiving Mass at the New Delhi Cathedral.

On Friday 29, Fr Tom will be in Bangalore to meet the Salesians of his Province and various cardinals and bishops. Until October 4, Fr Tom is scheduled to attend a number of press conferences, thanksgiving masses and meetings with civil and religious authorities in several cities throughout the State of Kerala: first to Kochi, then to Ramapuram, his hometown in Vaduthala, Trivandrum - where on October 3, he will be welcomed by the Prime Minister of the State, Shri Pinarayi Vijayan, and by Card. Baselios Clemis, Archbishop of the Syro-Malankarian Catholic Church - and finally to Kollam.