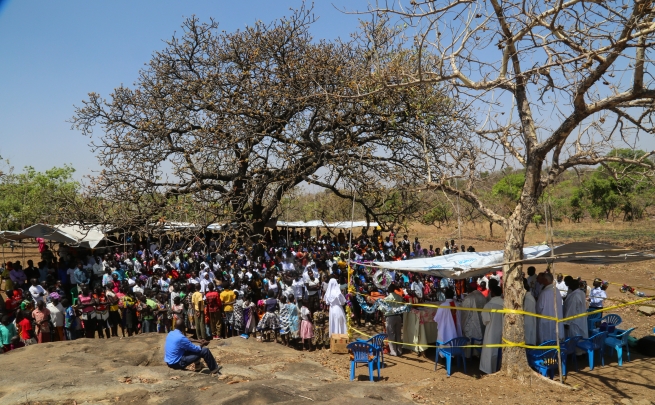 For the occasion, the archbishop of Gulu, Msgr. Gian Battista Odama, accompanied in procession by many children and adults, who presided over the Eucharist and formally authorized the activities of the Salesians within the camp.

The event was also attended by several priests from South Sudan, Ugandan authorities and pastors of other Christian Churches. On behalf of the Salesians, Fr Camiel Swertvagher, Provincial of the "Africa Great Lakes" Vice Province (AGL) - which includes Uganda - gave an official reading of the document sent by the Rector Major for the establishment of the new community.

Two thousand refugees came to the Eucharist. Their expectations regarding the presence of the Salesians are many: they especially for the possibility of receiving education, of giving continuity to the studies of their children. Young people, adolescents and children, above all, place great hopes in the presence of Don Bosco among them.

"This presence is a new frontier of the Congregation, which makes us perceive the freshness of the early Oratorian beginnings. It will have simple structures, able to adapt continuously to the needs of young refugees. It will require Salesians to offer Salesian care, which makes itself a prophecy of a friendly, educational and evangelizing presence among the last; it will also need intercultural communities that manifest with their lives the prophecy of communion in the face of marked conflicts, among the different causes, also of ethnic conflict," said Fr Martin Lasarte of the Mission Sector, present at the inauguration of the community.

Meanwhile, the number of refugees at the camp continues to grow, not only because of insecurity in South Sudan, but also because of hunger. One of the consequences of the conflicts is the abandonment of agriculture, which gives rise to a severe famine. There are 2.5 million refugees who have fled from South Sudan. 1.3 million have already arrived in Uganda. In Palabek, one of the last settlements, there are currently 41,000 and the number is increasing week after week.