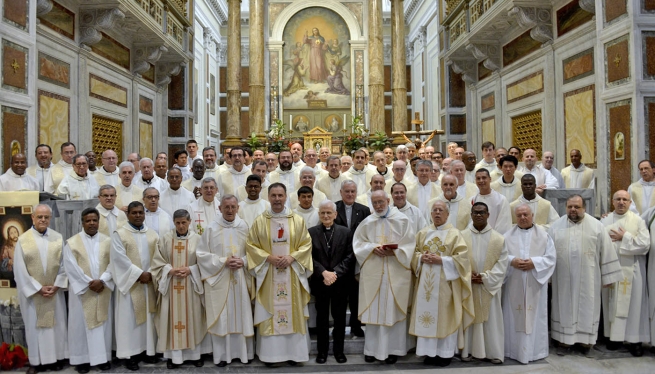 (ANS - Rome) - On 24 June, on the name-day feast of St. John the Baptist, the Oratory of Valdocco celebrates Don Bosco's name-day and it is always a much-felt event with many past pupils returning to give thanks for the benefits received. "On June 24, we celebrate a day of gratitude towards the Rector Major, specifically today to Fr Ángel Fernández Artime," said Fr Francesco Cereda, Vicar of the Rector Major.

The feast of thanksgiving to the Rector Major, celebrated yesterday 24 June, at the Sacred Heart in Rome, opened with a Eucharistic celebration inside the basilica, attended by over one hundred priests, many Salesians, Daughters of Mary Help of Christians, representatives of the Salesian Family active in the Sacred Heart, the World President of the Past Pupils of Don Bosco with his Council, the Salesian Cardinal Raffaele Farina and the Archbishop of Camerino, Msgr. Francesco Brugnaro, Salesian past pupil.

Speaking, the Rector Major, Fr Ángel Fernández Artime, said, "In this place, so emblematic for our Father Don Bosco, the work of the Sacred Heart, a place of many memories ... I cannot but give thanks to God for the beauty of communion and of community. This is an opportunity to thank all of you for the service you render for the good of the Congregation."