Ecuador - Half a century of presence among the Achuar
Featured 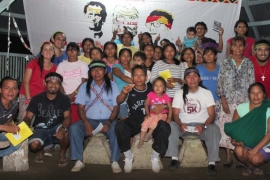 (ANS - Quito) - The Salesian presence in the Ecuadorian Amazon with the Achuar ethnic group began almost 50 years ago with the great Italian missionary Luigi Bolla, who took the indigenous name of Yánkuam’Jintia: Bright Star of the Path. He was the first to live among the Achuar, sharing his life and the Gospel among them. Half a century after the first contact with the Achuar people, Salesian mission work continues to focus on evangelization, education and human, social and cultural promotion.

Mission work among the Achuar people was accepted from the very start and soon paid off. Not only has it succeeded in ending the wars between tribes and families, but it has also provided an opportunity to help new generations through education.

In 1988 it was the Achuar themselves who asked the Salesian missionaries to found a mission in Wasakentsa. Leading the project were Fr Bottasso and the late Fr Broseghini. A school and a boarding school for the education and formation of Achuar youth were the initial pillars of this mission.

The Wasakentsa Mission, however, is not limited to teaching and training 110 students in the school. It also has 80 interns and 50 Achuar university students who come from far away. Furthermore, as a mission and as an outgoing missionary Church, it supports 49 other Achuar communities that exist throughout this vast territory. It has a population of about 5,000 inhabitants, with many children and young people (40% of the population) who dream of studying and having a more dignified life.

Even today, these communities can only be visited on foot, as there is no road. You cross rivers, swamps, hills, fallen trees, mud; one walks in the rain and the heat, among wild animals. All this to be able to meet people there, in their communities, to share the Word of God and celebrate the Eucharist.

The objective is to provide the population with a space for formation in human, cultural and Christian values. For this reason, mission work does not take place only in church, but in any and all other sites and locations, even while working hard or while playing sports with children, young people and parents.

During the pandemic and the lockdown, everything was more difficult. There have also been infections and deaths among the Achuar community, but the Salesian missionaries have never stopped being among them and with them to help the Achuar.