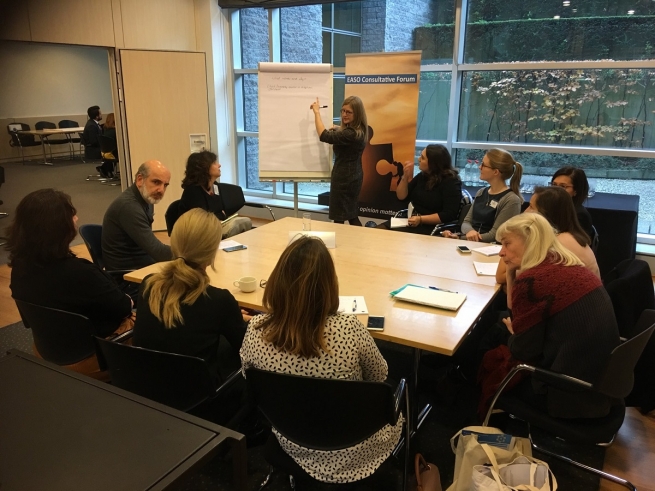 (ANS – Brussels) – In the framework of the Intergovernmental Conference to Adopt the Global Compact for Safe, Orderly and Regular Migration, taking place in Marrakech, Morocco, on 10 and 11 December 2018, there have been numerous conferences and activities wherein Salesian organisations have played an active role.

On 3rd December, Don Bosco International was invited to speak on access to education for migrant children to the Informal expert group on the rights of the child and the informal expert group on the protection of children in migration from the different EU member States co-chaired by DG HOME and DG JUST. During its intervention, DBI shared its report on the Salesian approach to Unaccompanied Minors and several best practices in Origin, Transit and Reception countries.

On 4 and 5 December 2018, the joint session of National Rapporteurs or equivalent mechanism and the EU Civil Society Platform against Trafficking in human beings Meeting was held in Brussels. Michela Vallarino and Barbara Terenzi participated in representation of VIS. The Platform, including around 160 EU selected NGOs active in the field of the fight against THB, meets on a regular basis and facilitates exchanges with national representatives to contribute in the implementation of appropriate policies and legislation in this area. This time there was the opportunity of meeting the new Italian team working at Equal Opportunities of the Council of Ministers in Rome and to re-establish contacts already started last year within the policy table which included, besides VIS, also Salesiani per il Sociale. On 4th December, the EU Commissioner for Migration launched the European Commission Second report on the progress made in the fights against trafficking in human beings - 2018.

On 5th December, the European Asylum Support Office held its 8th Consultative Forum Plenary Meeting, with around 120 selected EU NGOs participating. VIS has been part of this initiative for years. Barbara Terenzi, VIS, and Angel Gudina, DBI, attended and participated in the thematic workshops, with a special focus on Reception of Children.

As for the previous appointments, VIS contributes in the description of the Italian context with particular attention to the best practices and experiences carried out by its organization and the other Salesian organizations working in Italy in this area.

On its capacity of European representation, DBI shared the best practices from other EU member states such as Spain, France, Portugal, Germany, Austria, Malta and Ireland, in dealing with migrants, unaccompanied minors and vulnerable groups.

In addition, this appointment is particularly interesting and constructive as EASO is strongly engaged in Italy with specific training and awareness-raising activities with particular attention to children on the move. To this purpose it is interesting to highlight that both Barbara Terenzi and Michela Vallarino have been involved in targeted formation held by EASO on asylum with special attention to the Italian context. Similar initiatives will be studied at a European level, thanks to the involvement of DBI in this intense week of events.