Italy – Distant, but united: Corsa dei Santi 2020 will be a "virtual race" version 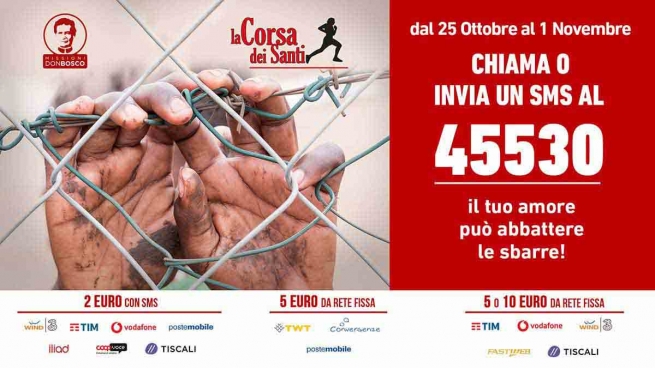 (ANS - Turin) – This year the restrictions imposed for the containment of Covid-19 prevent the "Race of the Saints" - the sporting and solidarity event promoted by the Salesians on the occasion of the Feast of All Saints - from taking place in the manner that previously characterized it. Nonetheless, the event, promoted by "Missioni Don Bosco", the Salesian Mission Office of Turin, has been scheduled, albeit in a different form, and fully respecting the inspiring principles that have always guided it: as a collective celebration, sporting event and instrument of solidarity. The 2020 edition will, in fact, be a "virtual race": from 7:00 on 30 October 2020 to 20:00 on 3 November 2020 (UTC +1), anyone can participate in the event by running 10 kilometers on any track.

It will be a remote event realized thanks to the Gps tracking system created by "TDS" through an app, which will allow participants, once downloaded, to be able to record their performance in real-time, to check the kilometers traveled at any time, relate the individual route to what would have been the traditional route of the Corsa dei Santi in Rome, and at the end of the 10 km, to indicate the virtual ranking position of each competitor.

Even if at a distance, the "Race of the Saints" will thus unite thousands of running fans in the sign of solidarity.

And this year too, the Race of Saints will also serve to provide concrete support to Salesian initiatives in the world, thanks to the solidarity campaign "Your love can break down the bars".

This year's project is aimed at minors deprived of their liberty in prisons around the world. According to the United Nations, more than one million children and young people around the world are deprived of their liberty in prisons or in child detention centers, accused of petty crimes. Of them, 59% are awaiting trial, treated as criminals when in reality they would instead need support and social assistance.

Following Don Bosco’s thought, according to whom the change of young people takes place through education, the Salesians work in detention centers to make these young people feel the joy of being listened to and someone paying attention to them.

The action of the Salesians takes the form of specific interventions in the different realities and in the different phases of the detention process: in Freetown, Sierra Leone, the Salesian missionaries are today the only ones who can enter the Pademba prison, where they bring food, water and medicine, offering support and guidance. In Italy, they have been engaged for years in juvenile prisons with an educational action that provides for prevention, support for school integration, sports and workshop activities, social reintegration.

In Luanda, Angola, they work to give access to alternative measures to the prison system; in Ciudad Juarez, Mexico, they take care of animation in prison, thanks to the "Brigada de la Alegria"; in Chennai, India, the reintegration of young people in the society…

It is for all these young people that the project “Your love can break down the bars” was conceived.