RMG - Participants of the Salesian School of Accompaniment visit the Sanctuary of St. Ignatius in Lanzo 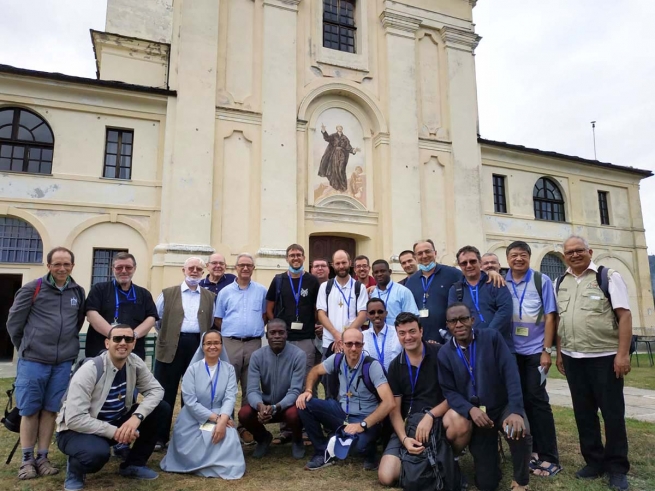 (ANS - Rome) - The participants of the Salesian School of Accompaniment, that has been taking place in Valdocco since last August 16, visited the Sant’Ignazio Sopra Lanzo shrine on 19 August, about 40 km north-west of Turin.

The team will remain with the School for the entire time until its end scheduled for September 17th. The Salesian School of Accompaniment is currently in Colle Don Bosco, while the first four days were in Valdocco. In recent weeks there have been visits to the church of Francis of Assisi and to the ecclesiastical boarding school, to the Don Bosco House Museum and to the shrine of Sant’Ignazio Sopra Lanzo.

The second part of this Salesian School of Accompaniment began yesterday at the Colle with an 8-day guided retreat. Then there will be other Salesian inputs: visits to the places of Don Bosco, Colle and its surroundings, with moments of reflection and sharing, training meetings in spiritual direction and related skills such as listening.

The Salesian School of Accompaniment is an experiential training. Following Don Bosco's experience and apostolic practice, it helps the participants to become aware of themselves, to grow as persons and as Salesians, and to learn to be attentive to others and to help them grow in their vocation.

The head of this Salesian School of Accompaniment is a Salesian brother, Raymond Callo, who is part of the Department of Formation. He has completed a formation in spiritual accompaniment and has a lot of experience in guiding candidates and religious, including Salesians. He belongs to the FIS province.

It is interesting to know that, as a preparation, each participant was asked to answer a questionnaire, and to read several books: among them, one by William A. Barry and William J. Connolly on "The practice of spiritual direction", and the other by Buccellati (Appunti per una storia spirituale del sac. Giò Bosco). As a condition, each participant is supposed to have a continuous experience of spiritual accompaniment: not only giving but also receiving spiritual accompaniment.

The first time that Don Bosco did the Spiritual Exercises in Sant’Ignazio Sopra Lanzo was in 1842, at the end of his first year at the Ecclesiastical Boarding School, as per the Board Regulations. He continued to return there for more than 30 years, even when, in 1866, the young Salesian Congregation began to do its Spiritual Exercises in Trofarello. He stopped only in 1874, when the shrine passed under new management and Don Bosco realized he was no longer welcome.

The shrine is now an hour's drive from Turin. Don Bosco, however, walked all the way, starting from Valdocco at 3 in the morning and arriving a little before lunch; and this not only for his own Spiritual Exercises, but also every time that Cafasso asked him to lend a hand for the Exercises given to the clergy and laity (MB II, 142; III, 536-37).

The visit to the shrine by the confreres who participate in the Salesian School of Accompaniment is part of the method adopted. The visit was preceded, in fact, by an intervention by Giuseppe Buccellato on the Spiritual Exercises in the life and ministry of Don Bosco. At the shrine itself, after a short visit, there was a time of reflection, prayer and group sharing.

The beautiful and evocative sanctuary of Sant’Ignazio Sopra Lanzo is a powerful symbol of what the Spiritual Exercises represented in the life and ministry of Saint John Bosco. He himself did the Exercises every year, in the Ignatian-Alphonsian form prevalent in the boarding school. He therefore offered the experience to his "street children" as early as 1847, the second year of his stay in the Pinardi House. And the preaching of the Spiritual Exercises was one of the five declared objectives of the Salesian Congregation until the Special General Chapter of 1971.