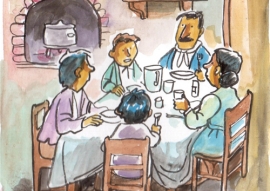 (ANS - Buenos Aires) - According to several psychologists and sociologists, in today’s world the father figure has lost his role and vanished from the symbolic family universe.

Simplifying the analysis of the contemporary situation, two "types" of family can be recognized, both inadequate: the non-existent one replaced by a simply "living as a couple" without a precise commitment; and the absent one, in which parents give up their role because, even if they are at home, they do not offer their children the active presence they need. In both cases, there is an escape from reality and a betrayal of responsibility. It is then reasonable to wonder whether the cause of the family crisis is in the fragility or rebelliousness of young people, or rather in the inadequacy or absence of adults.

There is a striking passage in the Memoirs of the Oratory written by Don Bosco: “When that terrible scarcity was over and matters at home had improved, a suitable marriage was proposed to my mother. However, she repeated again and again, "God gave me a husband and God has taken him away. With his death, the Lord put three sons under my care. I would be a cruel mother to abandon them when they needed me most."  On being told that her sons could be entrusted to a good guardian who would look after them well, she merely replied, "A guardian could only be their friend, but I am a mother to these sons of mine. All the gold in the world could never make me abandon them." (MO)

Parent-child relationship, and indeed, any relationship between adults and children, is asymmetric: it cannot be identical, and cannot be interchangeable. Nor can it always be the same, because the growth of children requires constant variations in a continuous evolutionary process.

Parents often seem confused in the face of the difficulty of understanding the profound cultural changes at the present time. They are seduced by the attractions of riches and the market, tired from work and indecisive in the face of the unexpected and insatiable claims of their children. All this makes it difficult to decide between intolerance and permissiveness, indifference and understanding, disinterest and affection. As a result, interpersonal relationships are avoided, and painful and conflicting situations are ignored, wasting natural spontaneous opportunities, from which a lot can be learnt if they are faced in dialogue with their children, accepting diversity and building together the future of each of them.