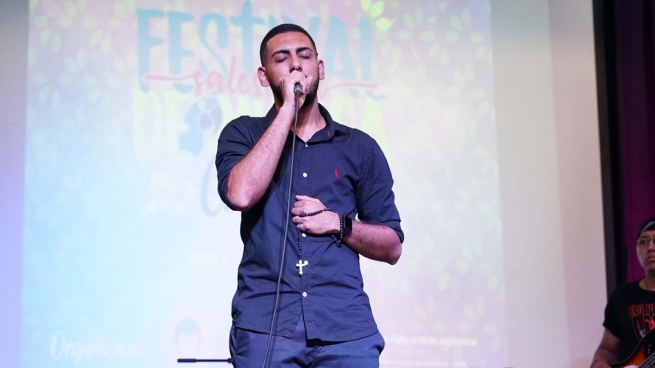 (ANS - Manaus) - From 1 June to 28 August 2021, the missionary Provinces of the Northern Region of Brazil, based in Manaus, the "St. Dominic Savio" of the Salesians of Don Bosco (SDB), and the "Our Lady of 'Amazonia" of the Daughters of Mary Help of Christians (FMA) promoted, in the context of the pandemic, the first edition of the Salesian Festival of Christian Music.

The festival was produced in a “hybrid” form due to the difficulties of the geographical distance of the Northern Region and the anti-contagion protection measures related to Covid-19. Thus, only the conclusion was made “in presence” at the auditorium of the "Colégio Dom Bosco" in Manaus.

The Salesian Festival of Christian Music had the objective of providing the hidden talents of the Christian youth audience with the stimulus for actions aimed at enhancing and disseminating music in all Christian perspectives. With this festival, therefore, an attempt was made to give a space of unity to young people of various Christian denominations present in Brazil and to encourage respect for diversity and the knowledge and appreciation of other denominations apart from their own.

The idea of ​​giving an ecumenical connotation to the festival, instead, came directly from the reflections of the Fraternity Campaign promoted for this year by the Brazilian Episcopal Conference, which has as its theme: "Fraternity and dialogue: Commitment of love" and by the motto: "Christ is our peace, He who made the two of us one people" (Eph. 2.14). Starting from this, the youth ministry teams of the two Provinces concerned, conceived an event that contemplated this ecumenical dimension and knew how to adequately involve young people.

This Salesian Christian Music Festival was also inspired by other similar festivals held in Brazil and in the north of the country, such as: "The Voice Brazil", the "Freshmen Festival" of the Social Service of Commerce in the State of Amazonas (SESC-AM), the 'Mamãe Margarida' House Music Festival (FMA), and others.

The festival was developed through pre-selective and preliminary stages: in practice, after registration, the young competitors went through a technical selection. Subsequently, the top 30 candidates were selected to participate in five eliminatory rounds. In the final there were only six youngsters left, who competed for 1st, 2nd and 3rd place, with an award of 1,000, 500 and 300 reais respectively.

In the prestigious finals, the following young artists competed: Geovanna Palhares and Laio Matheus, from Porto Velho; Vanderson Pessoa, from Castanhal; and Deysiane Marialva, Ítalo Maia and Victor Garça, from Manaus. Victor Garça was the final winner, thanks to his intense interpretation of the song "Minha essência" (My essence) by the Catholic singer Thiago Brado.

Through this festival, the missionary Provinces have managed to offer young Christians a fun-filled, artistic and religious celebration during the quarantine caused by Covid-19, overcoming geographical and social distancing.