RMG – “Post-Chapter reflection”: the Rector Major gives the Congregation its “road map” for the 2020-2026 six-year period 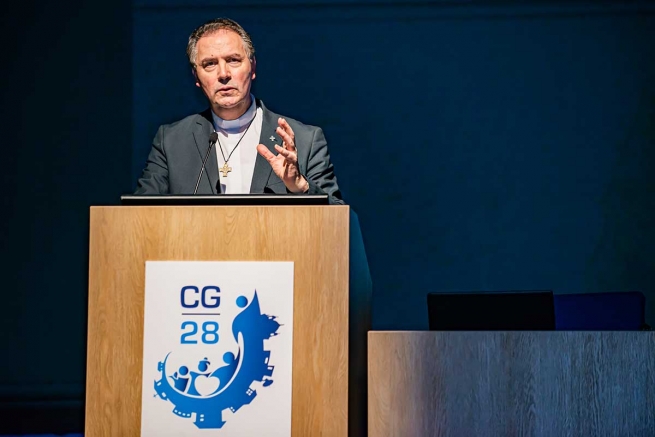 (ANS – Rome) – It is called “Post-Chapter Reflection” instead of “Chapter Document”, as has been the custom, given that the General Chapter Assembly had not approved this document. GC28, instead, asked the Rector Major and his Council to accept the request to bring the work begun by the Assembly to a good conclusion. The purpose of these post-Chapter reflections, however, is the same: to guide the life of the Salesian Congregation over the six years from General Chapter 28 until the next Chapter in 2026. We are talking about the official document that the Rector Major, Fr Ángel Fernández Artime, will officially release next Sunday, 16 August, on the 205th  anniversary of Don Bosco’s birth.

Fr Ángel, can you describe the document for us, where it came from and its value for the Congregation?

This text came about to ultimately set the direction for the work of the 28th General Chapter, which, as we know, lasted four weeks instead of the planned seven weeks. We did this together as a General Council, as well as myself individually, through reflection, prayer and discernment.

Included within the set of reflections entitled “Post-Chapter reflection” is “The six-year Action Programme”. This letter, or proposal, offers considerations following on from GC28, a fruit of the Chapter itself and summary of the journey our Congregation has taken over the previous six years. It is a broad reflection that I am offering the Congregation and which, in the first instance, takes up the spirit and much of the content of the Letter that the Holy Father, Pope Francis, addressed to GC28; it also includes elements that I have thought to be essential, ones already found in the reflection carried out by the Chapter Assembly on the first two nuclei; and finally, a reflection on the third nucleus that we developed in the General Council.

In juridical terms, documents approved by a General Chapter certainly have a unique and extraordinary value. This text, however, responds precisely to the decision of the Chapter, entrusting the General Council with the task of providing all the elements for the guidance of the Congregation over the next six years.

Here, then, is what we are offering: some guideline proposals for the educational, pastoral and charismatic work to be done up until the 29th General Chapter.

Also as part of these “Post-Chapter reflections” you will find the Holy Father’s Letter in its entirety, one that will certainly touch the heart of every Salesian; some specific reflections carried out at the Chapter or in the General Council; decisions made in time for them to be approved prior to the early closure; and the traditional appendices with various letters and addresses.

What are the guidelines contained in your agenda-setting Letter?

Eight proposals are indicated in this letter, all of them important and of great significance. They are the cornerstones of the proposal addressed to the whole Congregation. Each Province, however, has to be able to identify those it must focus on most, in accordance with its specific situation, results achieved in certain areas, or contrariwise its most pressing challenges in that context.

Among those that definitely cannot be set aside under any circumstances I would like to point out: concern for our charismatic identity (1); the formation of the Salesian pastor today (4), in order to give Salesian and prophetic responses to the situation; affective and effective presence among the young (3), especially the poorest of them (5); without overlooking the commitment to evangelisation and education to the faith (2) that is a worldwide need today more than ever.

What is the message that you and the General Council want to give when you present this on Sunday 16 August?

It is no accident that it is being presented on Don Bosco’s day: this means we are recalling that young lad for whom God had a special predilection, and who accepted His mission. The Constitutions remind us that the Congregation came into being not as a human venture, but by the inspiration of the Holy Spirit. So, by handing this document over on 16 August, we want to place the life and reality of today's Congregation under God's constant blessing on that project to which the Father and Teacher of Youth has called us.

When and how will it be disseminated?

On 16 August the document will be disseminated in the six most-spoken languages in the Congregation. Then it will be up to individual Provinces to see to a translation in local languages.

Moreover, given that I have undertaken to lead the Retreat for all the Provincials and their Councils throughout the world in this six-year term – as soon as it is possible to do so – I can also tell you that I will use many elements of this proposal in that reflection.

It will be one way to bring this vision of the Congregation closer to about 900 Salesians directly engaged in roles of animation and governance.