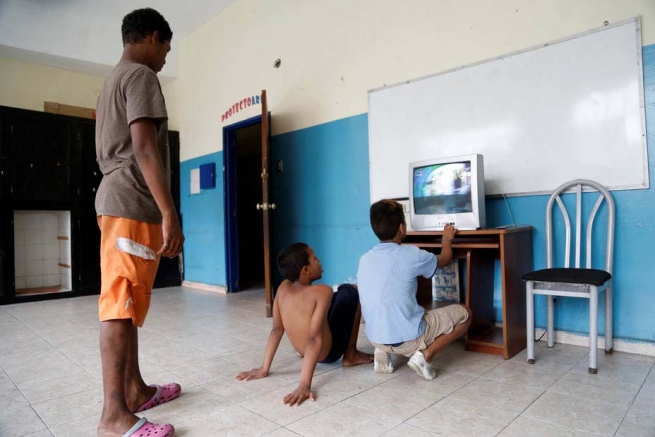 (ANS - Caracas) - At dawn and at sunset, the reality of so many of Caracas's children and young people becomes apparent: each one has his or her own story, but in common: life on the streets. Two institutions are pioneers in treating children in this condition: the "Red de Casas Don Bosco" and the "Patio Abierto Don Bosco."

"I'm not one who stays home. My place is the streets. I work there and that's where I'm staying," says a teenager who, along with a group of other youngsters, lives in the street, sleeping wherever night falls.

There are many reasons why so many children and teenagers of Caracas live this way, but the determining factor is almost always the condition of their families: domestic violence, lack of food ... Sometimes, however, the children simply feel better away from home and in the streets they find escape from their problems.

For Leonardo Rodríguez, President of "Red de Casas Don Bosco", a nonprofit association that deals with helping street children and teens every day, the problem lies basically in the absence of public policies that guarantee the exercise of the rights of minors and, at the same time, by the number of volunteer organizations and volunteers who deliver food to these children - an activity that has increased in recent months.

To promote the social reintegration of these children, he said, the commitment must go beyond a plate of food which, despite being a good act, gets them used to expecting that their needs are easily met by others.

At the "Patio Abierto Don Bosco" center, instead, Alexander García, one of the center's educators, says the work with children is broad-based: they are welcomed every day from 9 am. They can rest, play sports, wash themselves, wash their clothes, watch television ... But at the same time they are accompanied by paths of social reintegration at school and at work.

The educators of the "Patio Abierto Don Bosco", and those of the similar "Ámbar" association – which deals with socially vulnerable and/or sexually exploited girls - go out in the streets four times a week to invite the minors to their center, a first contact towards starting a journey that truly protects their rights and improves the quality of their lives.